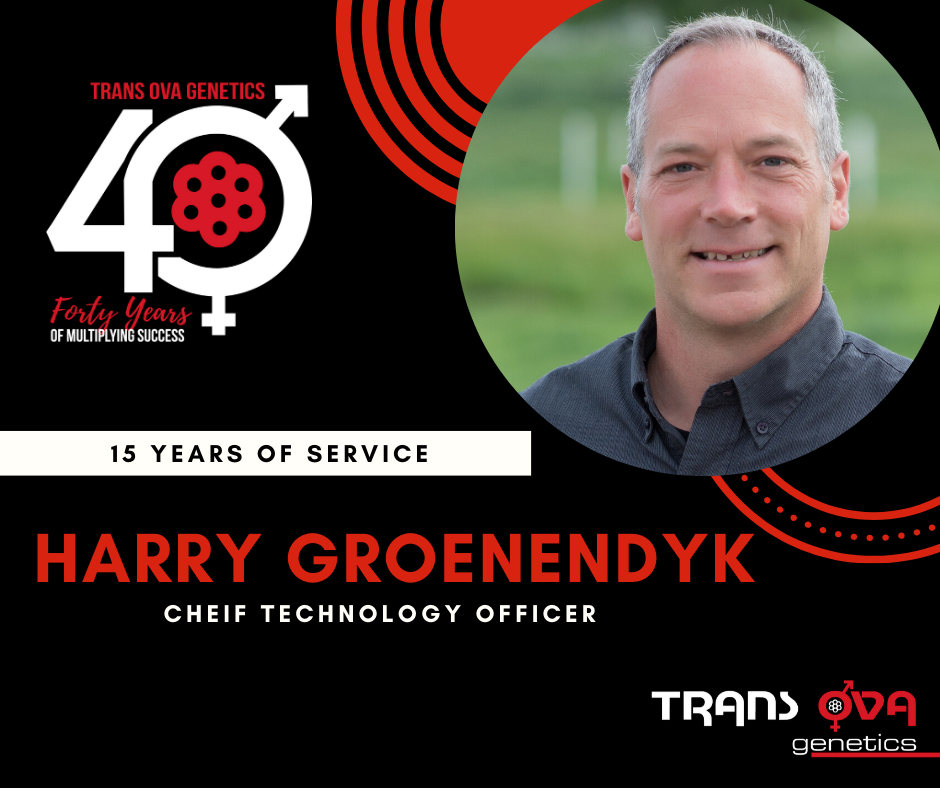 In honor of Trans Ova’s 40th Anniversary, we have asked team members to reminisce about their time with Trans Ova and what they are excited about for the future.

Our next team member spotlight to celebrate Trans Ova Genetics’ 40th Anniversary is our Chief Technology Officer, Harry Groenendyk. Over Harry’s 15 years with Trans Ova, he has served in a few different roles in both Iowa and Maryland, playing a huge roll in our continuous process improvement efforts. Harry currently leads the IT department in Sioux Center, IA.

1.   What is your favorite Trans Ova memory?

There are many memories at Trans Ova.  A family fun one I have is when my son Jake took his first steps in the old IVF lab in the basement – with Char as a witness!  A work-related fun memory was the buzz around when we first did a “Reverse Sort” and the opportunities we were envisioning it would bring for our clients.

2.   What do you like best about your time at Trans Ova?

Having been involved in many parts of the company, each role has been an opportunity for me to grow.  There are valleys and high points but understanding how both of those provided learning experiences for me is instrumental in who I am today.

3.   What excites you about the future of Trans Ova?

The people we continue to attract that become a part of Trans Ova are instrumental in where we are today, and who we will become in the future.

4.   What thoughts and emotions come to mind when you think about Trans Ova’s 40th anniversary?

Excitement.  There is never a shortage of opportunities we evaluate and consider. Stability.  As many ART companies have come and gone over the years, we have sustained challenging times and seasons in the industry.

5.   In what different ways has Trans Ova excelled or grown in the last 40 years?

The system to process large amounts of IVF embryos.  Thinking back to when Jake took his first steps (1992) – with a couple of incubators and a few matings – to where we are today.

6.   What is your biggest accomplishment at Trans Ova?

Getting some team members to use the ET system back in 1991.  We migrated from the paper, a 5 x 7 card-based system to a computer.  We knew that if we could get one of the “most difficult users” to adopt the system, we would be able to roll it out in full force.